A sport is an activity that refers to competitive physical activity. Sports are commonly referred to as physical athletics or activities based on physical skills to play for fun. These quotes on sports will explain the meaning of sports.

What are the types of sports?

There are many types of sports but some are the following:

Why is a sport important in our life?

Sports are important, it helps us maintain our character, energy, and strength which improves our blood circulation and keep us physically fit. It also improves mental sharpness and stability. Regular sports activities motivate us and lead us to good health.

What are the most popular sports in the world? 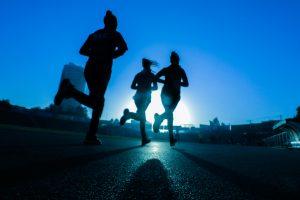 2. “I’ve missed more than 9000 shots in my career. I’ve lost almost 300 games. 26 times, I’ve been trusted to take the game winning shot and missed. I’ve failed over and over and over again in my life. And that is why I succeed.” — Michael Jordan

4. “Number one is just to gain a passion for running. To love the morning, to love the trail, to love the pace on the track. And if some kid gets really good at it, that’s cool too.” – Pat Tyson

7. “You are never really playing an opponent. You are playing yourself, your own highest standards, and when you reach your limits, that is real joy.” — Arthur Ashe

8. “Sport has the power to change the world. It has the power to inspire, it has the power to unite people in a way that little else does. It speaks to youth in a language they understand. Sport can create hope, where once there was only despair. It is more powerful than governments in breaking down racial barriers. It laughs in the face of all types of discrimination.” – Nelson Mandela

9. “The fight is won or lost far away from witnesses − behind the lines, in the gym, and out there on the road, long before I dance under those lights.” – Muhammad Ali

10. “You have to do something in your life that is honorable and not cowardly if you are to live in peace with yourself.” – Larry Brown

13. “Football is a simple game. Twenty-two men chase a ball for 90 minutes and at the end, the Germans always win.” – Gary Lineker

15. “The mind is the limit. As long as the mind can envision the fact that you can do something, you can do it, as long as you really believe 100 percent.” – Arnold Schwarzenegger

16. “Gold medals aren’t really made of gold. They’re made of sweat, determination, and a hard-to-find alloy called guts.” – Dan Gable

17. “Most people never run far enough on their first wind to find out they’ve got a second.” – William James

19. “But I think when we play so often in finals, I think it adds something to the game, you know, because people sometimes miss it and sometimes they don’t have it and they want it, and when they have it, they don’t want it. It’s kind of very strange how that goes.” – Roger Federer

20. “Doctors and scientists said breaking the four-minute mile was impossible, that one would die in the attempt. Thus, when I got up from the track after collapsing at the finish line, I figured I was dead.” – Roger Bannister

21. “You can’t put a limit on anything. The more you dream, the farther you get.” – Michael Phelps

24. “I want to be a dad, first and foremost. I want to be a good father. I’ve spent so much of my life on the move and traveling around the world that just to set up a home for my family and be a good dad is something that motivates me.” – Ricky Ponting

25. “Whoever said ‘It’s not whether you win or lose that counts’ probably lost.” – Martina Navratilova

26. “I’ve been in the twilight of my career longer than most people have had their career.” — Martina Navratilova

27. “Most people give up just when they’re about to achieve success. They quit on the one-yard line. They give up at the last minute of the game one foot from a winning touchdown.” – Ross Perot

28. “The harder the battle, the sweeter the victory.” – Les Brown

29. “Age is no barrier. It’s a limitation you put on your mind.”– Jackie Joyner-Kersee

31. “I’ve missed more than 9000 shots in my career. I’ve lost almost 300 games. 26 times, I’ve been trusted to take the game-winning shot and missed. I’ve failed over and over and over again in my life. And that is why I succeed.” – Michael Jordan

32. “The difference between the impossible and the possible lies in a person’s determination.” – Tommy Lasorda

35. “Just take the ball and throw it where you want to. Throw strikes. Home plate don’t move.” — Satchel Paige

36. “Sportsmanship for me is when a guy walks off the court and you really can’t tell whether he won or lost when he carries himself with pride either way.” – Jim Courier

37. “I just want people to see me as a hard-working footballer and someone who is passionate about the game.” – David Beckham

41. “At one point in your life you either have the thing you want or the reasons why you don’t.” – Andy Roddick

43. “When you’ve got something to prove, there’s nothing greater than a challenge.” – Terry Bradshaw

44. “If you have everything under control, you’re not moving fast enough.” — Mario Andretti

44. “There may be people that have more talent than you, but there’s no excuse for anyone to work harder than you do.” – Derek Jeter

What is mean by thinking? Thinking is manipulating information, such as when we create ideas, to solve problems, to make reasonable and informed decisions, thought of action, and creating ideas. An idea can be an image, a voice, or an emotional feeling. These thinking quotes will help you understand the meaning of thought and thinking.  […]

David Beckham is a famous professional football player from England who is currently retired. Beckham is also the current president of the football club Inter Milan CF. He was an ex-national player for the England football team. He is also played for the Manchester United football club in the Barclays English Premier League as well […]