Who was Albert Einstein?

Albert Einstein was a German-born theoretical scientist. He produced the theory of relativity, one of the two pillars of modern physics. He was born in 1879, March 14 in Germany. His work is also known to have influenced the philosophy of science. These Albert Einstein quotes paint an interesting story of him, these quotes explain his character and a deeper understanding of life from his perspective.

In 1921, he won the Nobel Prize in Physics for his description of the photoelectric effect. Einstein soon began to formulate his ideas for a new science of cosmology, which believed that the universe was dynamic rather than static, and capable of spreading and contracting. In the late 1930s, Einstein’s ideas, including his equation E = mc2, helped form the basis for the development of the atomic bomb.

After the passing of Albert Einstein, many people started to read quotes from Albert Einstein, his level of intelligence is amazing, what he said when he was alive now resonates with everyone. He was a man who was very clever and the advice on life, education and imagination he left being are spectacular.

What was Albert Einstein’s IQ?

The problem is, no one can say for sure what Einstein’s IQ was. There is no indication that it was tested. IQ testing was still in its infancy in the early 1900s, when Einstein first emerged as a scientific luminary. The maximum IQ score set by WAIS-IV, the most commonly used test today, is 160.

At the age of 76, he died. After suffering an aortic aneurysm eruption several days ago, he died on 18 April 1955. 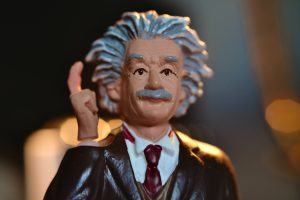 1. “Everybody is a genius. But if you judge a fish by its ability to climb a tree, it will live its whole life believing that it is stupid.” – Albert Einstein

2. “A human being is part of a whole called by us the universe.” – Albert Einstein

4. “I am by heritage a Jew, by citizenship a Swiss, and by makeup a human being, and only a human being, without any special attachment to any state or national entity whatsoever.” – Albert Einstein

5. “Unthinking respect for authority is the greatest enemy of truth.” – Albert Einstein

6. “If I had only known, I would have been a locksmith.” – Albert Einstein

7. “If people are good only because they fear punishment, and hope for reward, then we are a sorry lot indeed.” – Albert Einstein

8. “You never stop failing until you stop trying.” – Albert Einstein

10. “Be a loner. That gives you time to wonder, to search for the truth. Have holy curiosity. Make your life worth living.” – Albert Einstein

11. “A person starts to live when he can live outside himself.” – Albert Einstein

12. “Look deep into nature, and then you will understand everything better.” – Albert Einstein

13. “A table, a chair, a bowl of fruit and a violin; what else does a man need to be happy?” – Albert Einstein

14. “All religions, arts, and sciences are branches of the same tree.” – Albert Einstein

17. “Imagination is more important than knowledge. For while knowledge defines all we currently know and understand, imagination points to all we might yet discover and create.” – Albert Einstein

18. “Concern for man and his fate must always form the chief interest of all technical endeavors. Never forget this in the midst of your diagrams and equations.” – Albert Einstein

19. “Truth is what stands the test of experience.” – Albert Einstein

21. “It has become appallingly obvious that our technology has exceeded our humanity.” – Albert Einstein

22. “There comes a time when the mind takes a higher plane of knowledge but can never prove how it got there.” – Albert Einstein

25. “Two things are infinite: The universe and human stupidity, and I’m not sure about the universe.” – Albert Einstein

26. “Out yonder there was this huge world, which exists independently of us human beings and which stands before us like a great, eternal riddle, at least partially accessible to our inspection and thinking. The contemplation of this world beckoned like a liberation…” – Albert Einstein

27. “Education is what remains after one has forgotten what one has learned in school.” – Albert Einstein

29. “We cannot solve our problems with the same thinking we used when we created them.” – Albert Einstein

30. “He who can no longer pause to wonder and stand rapt in awe, is as good as dead, his eyes are closed.” – Albert Einstein

31. “I fear the day that technology will surpass our human interaction. The world will have a generation of idiots.” – Albert Einstein

32. “Human beings must have action, and they will make it if they cannot find it.” – Albert Einstein

33. “I never think of the future. It comes soon enough.” – Albert Einstein

34. “All that is valuable in human society depends upon the opportunity for development accorded the individual.” – Albert Einstein

35. “Common sense is the collection of prejudices acquired by age eighteen.” – Albert Einstein

36. “If you can’t explain it simply, you don’t understand it well enough.” – Albert Einstein

37. “I believe in intuitions and inspirations. I sometimes feel that I am right. I do not know that I am.” – Albert Einstein

38. “The important thing is not to stop questioning. Curiosity has its own reason for existing.” – Albert Einstein

39. “Life is like riding a bicycle. To keep your balance you must keep moving.” – Albert Einstein

40. “Anger dwells only in the bosom of fools.” – Albert Einstein

41. “The only source of knowledge is experience.” – Albert Einstein

42. “Only a life lived for others is a life worthwhile.” – Albert Einstein

44. “Once you stop learning, you start dying.” – Albert Einstein

45. “A person who never made a mistake never tried anything new.” – Albert Einstein

46. “Any man who reads too much and uses his own brain too little falls into lazy habits of thinking.” – Albert Einstein

48. “Education is not the learning of facts, but the training of the mind to think.” – Albert Einstein

49. “Common sense is nothing more than a deposit of prejudices laid down in the mind before you reach eighteen.” – Albert Einstein

50. “Only one who devotes himself to a cause with his whole strength and soul can be a true master. For this reason, mastery demands all of a person.” – Albert Einstein

Working out is important for our bodies and even our mental well-being. We should make sure our health is taken care of overall all other things in life, as without health, nothing else is possible. There are many ways to keep yourself fit and healthy, exercise regularly, find a good workout routine and be consistent […]

40 Wedding Quotes For Your Special Day By Famous People

A wedding is a very important event in someone’s life. Wedding trends have changed over centuries but some traditions are still alive and these traditions make the wedding ceremony a day to remember for the bride, groom, and guests. For some a wedding is once in a lifetime experience, so a lot of time and […]