A sport is an activity that refers to competitive physical activity. Sports are commonly referred to as physical athletics or activities based on physical skills to play for fun. The only way to understand the true meaning of sports is by reading quotes on sports from others who have good knowledge of the aspects of sports.

What are the types of sports?

There are many types of sports but some are the following:

How can quotes on sports inspire us?

Sports help us maintain our character, energy, and strength which improves our blood circulation and keep us physically fit. It also improves mental sharpness and stability. Regular sports activities motivate us and lead us to good health.

What are the negative effects of sports?

Sports can cause unhealthy stress in our children’s bodies, especially a child who is forced to improve and who feels failure at every turn. There are many disadvantages to playing the game such as Costs and extreme stress, strained relationships, delusions about the future, inflated egos, and Cliques.

What are the most popular sports in the world? 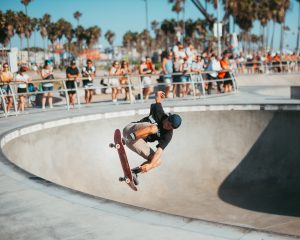 1. “I don’t count my situps. I only start counting once it starts hurting. ” – Muhammad Ali

2. “Sportsmanship for me is when a guy walks off the court and you really can’t tell whether he won or lost when he carries himself with pride either way.” – Jim Courier

3. “Never give up, never give in, and when the upper hand is ours, may we have the ability to handle the win with the dignity that we absorbed the loss.” – Doug Williams

4. “Football is football and talent is talent. But the mindset of your team makes all the difference.” – Robert Griffin III

5. “The harder the battle, the sweeter the victory.” – Les Brown

7. “When my time on Earth is gone, and my activities here are past, I want them to bury me upside down, and my critics can kiss my ass.” – Bobby Knight

8. “Make sure your worst enemy doesn’t live between your own two ears.” – Laird Hamilton

9. “The road to Easy Street goes through the sewer.” – John Madden

10. “You can’t put a limit on anything. The more you dream, the farther you get.” – Michael Phelps

11. “Do you know what my favorite part of the game is? The opportunity to play.” – Mike Singletary

12. “A good coach will make his players see what they can be rather than what they are.” – Ara Parseghian

15. “Sports do not build character. They reveal it.” – Heywood Broun

16. “Wisdom is always an overmatch for strength.” – Phil Jackson

17. “In the end, it’s extra effort that separates a winner from second place. But winning takes a lot more that, too. It starts with complete command of the fundamentals. Then it takes desire, determination, discipline, and self-sacrifice. And finally, it takes a great deal of love, fairness, and respect for your fellow man. Put all these together, and even if you don’t win, how can you lose?” – Jesse Owens

18. “I’ve learned that something constructive comes from every defeat.” – Tom Landry

19. “When you’ve got something to prove, there’s nothing greater than a challenge.” – Terry Bradshaw

20. “There may be people that have more talent than you, but there’s no excuse for anyone to work harder than you do.” – Derek Jeter

22. “I always tell kids, you have two eyes and one mouth. Keep two open and one closed. You never learn anything if you’re the one talking.” – Gordie Howe

23. “People ask me what I do in winter when there’s no baseball. I’ll tell you what I do. I stare out the window and wait for spring.” – Rogers Hornsby

29. “I’ve failed over and over again in my life. And that is why I succeed.” – Michael Jordan

30. “One man practicing sportsmanship is far better than 50 preaching it.” – Knute Rockne

32. “Football is a simple game. Twenty-two men chase a ball for 90 minutes and at the end, the Germans always win.” – Gary Lineker

34. “Stubbornness usually is considered a negative; but I think that trait has been a positive for me.” – Cal Ripken, Jr.

35. “You have to expect things of yourself before you can do them.” – Michael Jordan

37. “The time when there is no one there to feel sorry for you or to cheer for you is when a player is made.” – Tim Duncan

38. “Most people never run far enough on their first wind to find out they’ve got a second.” – William James

40. “Baseball is the only field of endeavor where a man can succeed three times out of ten and be considered a good performer.” – Ted Williams

41. “Gold medals aren’t really made of gold. They’re made of sweat, determination, and a hard-to-find alloy called guts.” – Dan Gable

44. “Somewhere behind the athlete you’ve become and the hours of practice and the coaches who have pushed you is a little girl who fell in love with the game and never looked back… play for her.” – Mia Hamm

46. “Every day is a new opportunity. You can build on yesterday’s success or put its failures behind and start over again. That’s the way life is, with a new game every day, and that’s the way baseball is.” – Bob Feller

48. “Champions keep playing until they get it right.” – Billie Jean King

49. “Winning isn’t everything, but wanting to win is.” – Vince Lombardi

50 Self Care Quotes By Famous People

Self care is something that you should prioritize. Your health is important, take great care of your health, when you have your health, the rest follows, such as wealth. Health is wealth, never destroy your health because of wealth, take it easy and make sure your health is put first. In order to keep your […]

Faith is a power that works throughout our lives, it is the beliefs we hold within ourselves. However, as soon as we begin to develop reason, which is a process of acquiring knowledge that we need to live life, we tend to lose our self-confidence and our confidence in others. Doubt begins to creep in, […]

Being a billionaire requires you to taste the millionaire life, the billionaire is someone who can be classed as someone that has overachieved in life. A billionaire can do whatever they want in life, they have everything, and to get to that level requires hard work and dedication. The people who have reached that level […]